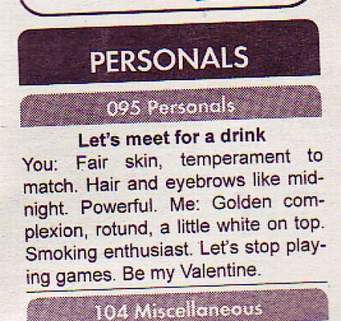 The statement is quite common in my circle of Christianity. I often see it on Facebook. Some of my own Christ-honoring kin state this rather emphatically.

I give the benefit of the doubt those who use it have good motives. No true Christian desires others to merely mouth religious platitudes or think they’re okay with God because of participating in some ritual. They desire a living, convictional faith in Christ.

But I stay away from the phrase because I believe it creates more problems than it solves. Here are two  problems:

For decades (if not centuries) the notion that I define my own truth has saturated our culture. A man by the name of Immanuel Kant (1724-1804) introduced (in philosophical circles) the concept that truth is subjective, there are no knowable absolutes. Christianity then  is of the emotions and heart. It’s not scientifically provable — it’s not rational, therefore is a matter of one’s subjective feelings.

Today, that mindset permeates our culture like the dust of a desert windstorm. “Do what you feel is best.” “Look into your heart.” “Trust your heart.” From Disney characters to presidential candidates and Supreme Court justices, one’s emotions and heart are what are pure and the final source for what one believes. What I presently feel (which may change tomorrow) is truth for me. You may have a different truth than I do.

When we emphasize ‘personal relationship,’ that mindset invariably comes into play.

Let’s suppose with all sincerity and concern for their soul, you tell someone, “To be a Christian is to have a personal relationship with Jesus Christ. It’s not a religion.” You explain Jesus is God and died on the cross for their sins. Now they must personally ask Jesus into their heart, or, accept Him as their Savior. You tell them that if they do, they will be forgiven of their sins and have peace with God, and, go to heaven when they die.

Absent of the Spirit of Truth convicting them their heart is deceitful above all else, it would be natural for that person to conclude, ‘Cool, I can have a personal relationship with God according to what I feel in my heart.” They could say what you told them to say. They could talk to you about what they feel about God. They might even read their Bibles (interpreting it according to what they feel it means). And they would feel that’s what it means to be a Christian. By ‘personal relationship’ they understand it as they get to define what it means.

Suppose you attempt to disciple them – help them grow in their alleged faith in Christ. You challenge them to read their Bibles, teach them to pray each day and go to church and Sunday school. For several Sundays they come but then they don’t. You stop by and check in on them and ask them about their absences. Their response: “I’m doing my own thing with God. I don’t need all that other stuff.” When you tell them that Christ gives Christians the local church and pastors to help them, and that Christians are not to forsake assembling together, your friend tells you: “You told me it’s a personal relationship, not a religion. Now you’re telling me I have to be religious!”

When you try to show them from the Bible what God says, they say, “That’s just your interpretation. I have my own personal relationship with God; mine’s just different than yours.”

Second, how Americans understand ‘being religious’

At age 42, New England Patriots’ quarterback Tom Brady is religious about his diet and exercise regimen. With seven children my mom was religious about baking on Mondays, grocery shopping on Wednesdays and doing laundry on Saturdays.

One of the qualities of the fruit of Spirit is self-control (Galatians 5:22).

Paul writes Timothy that he is to discipline himself for the purpose of godliness (I Tim. 4:7).

He commands the Christians in Ephesus to make the most of their time because the days are evil. They were not to be foolish (Eph. 5:15-17).

We’re told in Titus 2 that saving grace results in living sensibly, or, with self-control (Titus 2;11-14).

The Christian life is compared to a disciplined, trained athlete competing according to the rules (II Cor. 9:24-27; II Tim 2:5).

We have a neighbor who is very reclusive. Several years ago I managed to visit with him after someone had driven across his lawn and he was outside examining the damage. He said, “You are a religious person.” When I asked him why he said that, he told me, “Because every Sunday morning I see you and your wife all dressed up get in your car. And I assume you’re going to church.”

Webster’s dictionary defines religion as: commitment or devotion to religious faith or observance. Americans equate the word ‘religion’ with commitment, habits, discipline and being part of a visible group of religious people. Which according to the texts I referenced above is exactly how Christians are called to live.

It is also true Christians are to establish and live in a devoted, disciplined manner doctrinally and morally according to what God says in the Bible. This includes being with Christ’s people on a regular basis.

All that sounds religious to me.

Insisting that Christianity is not a religion, but a relationship encourages spurious faith not the faith which was once for all handed down to the saints (Jude 3). It undermines the sufficiency and authority of Scripture (II Tim. 3:16-17) implying what we feel defines our relationship with God and there is no need to come under the authority of what He instructs and commands all believers.

I say, tear the ‘God wants to have a relationship with you’ bumper sticker off and replace it with, “Believe on the Lord Jesus Christ and you will be saved!” It is what God says.